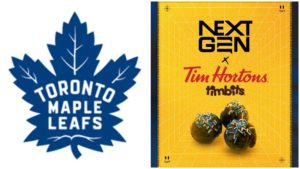 Tim Hortons is partnering with the Toronto Maple Leafs on the limited-edition team-themed Next Gen Timbits, which are available now through April 6 at participating downtown Toronto restaurants.
The new product features blue and white sprinkles overtop on the classic Chocolate Glazed Timbits. The limited-edition offering made their debut March 23 at Scotiabank Arena as the Original Six NHL franchise hosted the Next Gen game, which celebrates youth in the community.
“We were thrilled to work with our long-time partners the Toronto Maple Leafs on their Next Gen event and wanted to give all of
Toronto the opportunity to try the these new Timbits,” said Hope Bagozzi, chief marketing officer for Tim Hortons. “Our downtown Toronto restaurant owners who carry [them] are so excited to be sharing them with hockey fans and all their guests.”
Tim Hortons gave away 500 boxes at the March 23 Leafs game, and they are now available at more than 60 Tim Hortons restaurants in downtown Toronto until April 6
“Tim Hortons is a staple in our community and is known by our fans as a dedicated partner for over 10 years,” said Jordan Vader
, senior vice president, Global Partnerships, MLSE. “This Next Gen-themed activation is yet another creative idea as a result of strong partner collaboration, and both our fans in and outside of Scotiabank Arena, who look forward to the Next Gen game every season, can now share in the same experience.”